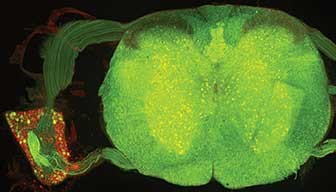 Until recently, spinning disc confocal microscopy systems featured laser illumination due to light loss through the system. However, now that LEDs are more powerful, they are being used in some of the less expensive systems. With discs that permit greater transmission of light, LEDs have been especially successful.

Other methods where LEDs have become a cheaper alternative are in TIRF microscopy, photodynamic therapy (where light is used to reduce tumours), FRET (Forster resonance energy transfer) for determining protein-protein interaction and in calcium imaging. LED use in calcium imaging has become widespread because of its sub-millisecond switching and higher stability, as compared to the fastest short-arc grating-based systems. Previously, ratio metric images could be imaged at 10 fps. The speed has increased to 100 fps with LEDs.

Figure 1. Cross section of the mammalian spinal cord and dorsal root ganglion. All neurons are labelled in red with a subset expressing eGFP. Courtesy of Robert Hartley.

Fluorescence or label-free imaging? Custom microscopy illumination means you don’t have to choose!
June 17, 2021
Advanced Techniques Using LED Illumination
February 3, 2016
Go to Top
By continuing to browse this site, you agree to our use of cookies.