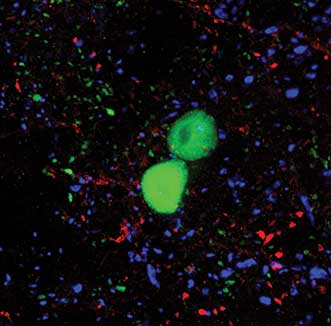 In neuroscience, there is a long-standing desire to selectively target one cell type for investigation without affecting other cells in the sample. This was achieved, in part, 15 years ago by using Cre-Lox methods of labelling cells that transiently express genes known to be selective for that cell type. However, even though the cell types could be labelled, the method of recording from the individual cells was technically challenging or potentially damaging to the tissue and therefore not always suitable.  Some of these challenges were overcome with the development of optogenetics in 2005

Optogenetics marries optical modulation of action potentials with genetic methods of selectively targeting single cell types in a heterogeneous population, such as in brain tissue. It is based on modifications of bacterial opsin, a single unit, light-activated ion pump which is selectively delivered into target cells via viral vectors. Shining focused light onto the cells will selectively activate or inhibit, depending on the ion channel expressed.

Until the past several years, lasers were still considered the preferred choice for optical stimulation due to their narrow spectral line width and lower dispersion in tissue than noncoherent sources. However, the narrow FWHM of LEDs, the recent increase in power/light delivery (100 mW/mm2 at the end of a fiber, approximately 1 percent of total LED power) and fast temporal switching of LEDs make them now the preferred choice. “As far as optogenetics applications are concerned, LEDs surpass lasers in almost every respect,” according to OpenOptogenetics. As the protocols for optogenetics become more standardized, and within the capability of new research labs, LED light sources are increasingly the more attractive choice for research groups.

How optical filters can make your custom microscopy illumination work smarter
August 5, 2021
Recent Posts
Archives
Go to Top
By continuing to browse the site you are agreeing to our use of cookies.